Halloween is coming, friends!!!  And last night I made my costume.  Like I said, I'm not telling what it is yet, but I LOVE IIIIIT!!!  I'm so proud of myself.  It took me 7 HOURS to make!!!!  And I did it all at once.  Steven's will be much easier, we just have to go get the stuff for it tonight.  Trunk-or-Treat is tomorrow and I can't wait!  I freakin love Halloween. 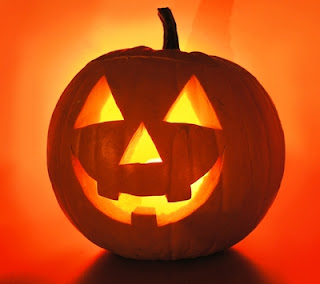 So we went to Wal-Mart to get fabric last night (which, by the way, does not have as much of a selection as they used to) and got what I needed.  We left the store and found out they didn't charge us for 3 of the fabrics.  Luckily we were still in the parking lot so it wasn't like I had to go way out my way to correct the problem, but I'll tell ya . . . they didn't make it easy to be honest.  It turned out the mistake was that I hadn't gotten those 3 fabrics measured cause I just wanted to buy the whole thing, so she just scanned the one paper, thinking it was for all of it.  I had to take it back and get it measured and priced (no big deal), and then ended up standing around forEVER, waiting for someone to come to the counter!  Grrr.  I asked someone to page an employee to the counter.  After a few minutes, he did.  Still nobody came!  So I had to go bother the electronics guy again, and he ended up having to be the one to do it.  FINALLY I paid for it and left, but we missed 20 minutes of the debate because of it.

I have a complaint about Larry.  The only thing is, it's about political differences and I don't want to stir anyone's emotions, so I don't think I'll share.  But just know:  It's there.  I WILL say, however . . . People:  Know what you're talking about before you open your mouth.  It will probably make it so fewer people want to punch you in the face.
Posted by Cassie at 2:19 PM