Steven says I should call this one: LIES AND DECEIT (He hasn't even read it yet!)

I'm sure I've mentioned that my husband is hilarious.  I'm constantly laughing because we share the same sense of humor and he just cracks me up!  Over the last week I've been occasionally jotting down little funny things that he says, so I'd like to share some with you:

#1
After we left Wal Mart, after buying the stuff to make his costume, he tells me we could've bought some little jewels to go on his crown so that it wasn't just plain gold, and that he thought of this while we were in line at the checkout but he didn't tell me cause he didn't actually want me to run back and grab them.  Of course I was upset.

Me:  Well thanks a lot, Steven!  Now I have the idea in my head and I'm going to have to break one of my necklaces to get little jewels!  (Cause the Trunk-or-Treat was the next day and we weren't coming back to the store.)

Steven:  Good.  You have too many necklaces.  You could stand to lose one.

Excuse me but how DARE you, sir!!  But I still thought it was funny.

#2
You know that thing floating around the internet . . . I'll show you: 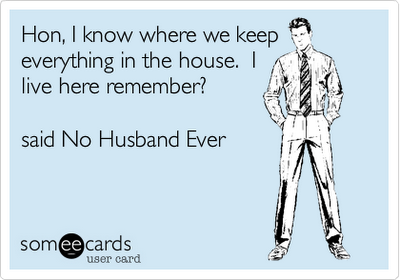 It's nice to know I'm not the only one who can relate to this.  The other day we were in the kitchen and I asked Steven to get me something to put the cilantro in to keep it fresh.

What??  That's like the easiest thing to find!  I couldn't believe it.  And not only that, but then he was cooking something and asked the question:

"Which spatula should I use?"

#3
I asked Steven to fill up my water bottle.  I don't remember what I did to cause him to have such an attitude, but he says:

So disgusting.  And no, he didn't do it.  He just likes to mess with me.

Steven:  How old are you really?

#5
I will often hurt myself whilst attempting to attack him.  His favorite expression:

The way he says it really irks me cause I'm all, "It's not like you didn't deserve it!  It's not like I was attacking you for no reason!"

#6
And finally, whenever I tell him to do something -- not as an order, but as a helpful suggestion or gentle request for help, like "put your socks in the drawer, please" -- he comes back with:

"Don't you EVER tell me how to live my life!"

<3
I just love him so much.  He's silly, but the perfect husband and a wonderful man.  I couldn't have done better.
Posted by Cassie at 11:27 AM